We continue our series on, “How do I know the Bible is the word of God?” The first article addressed how someone comes to believe the Bible. Our deepest convictions are held for 3 reasons: rational, social, and personal (“The 3-Legged Stool of Belief”). The second 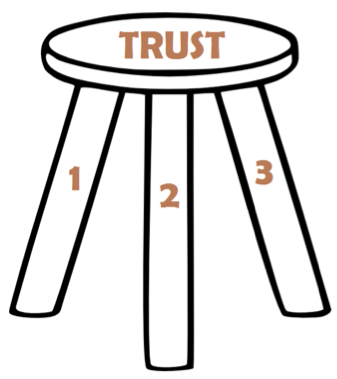 article addressed the rational reasons for believing the Bible. This week we address the second “leg of belief”: social reasons.

What are social reasons?

Society influences us positively and negatively in the beliefs we adopt. Positively by praising certain beliefs, and negatively by shaming others. For example, a girl raised in a Christian home and school may become best friends with a group of intelligent, kind, and popular unbelievers in college. If she walks away from Christianity, there is no question her friends influenced her beliefs. Furthermore, her decision was not merely a rational decision but also socially pressured. Let's take a look at some of the social pressures preventing people from believing the Bible.

The first is what the Bible teaches about slavery, which needs explanation.[1] First, we need to remember that history has shaped the way we interpret the word “slavery.” It triggers images of what is depicted in movies like 12 Years a Slave, Lincoln, and Django Unchained. We need to be aware of this and humble enough to admit our problem with the Bible has more to do with cultural influence than it being wrong.

How does the Bible talk about slavery?[2] The majority of the Bible’s teaching on slavery is found in the Old Testament. The specific kind of slavery depicted in the Old Testament is almost always “debt-slavery.” If someone was in debt, they could go to someone wealthier and offer their services until the debt was paid. There is a major difference between that and “chattel-slavery.”[3] The Bible explicitly condemns the stealing and selling of human beings for slavery (Exodus 21:16; Deuteronomy 24:7; 1 Timothy 1:9-11). Furthermore, according to Old Testament law it was wrong to return slaves to their masters (Deuteronomy 23:15-16) and slaves were even permitted freedom if they were mistreated and abused (Deuteronomy 21:25-26).

Finally, we must never forget the way in which the coming of Christ was a “game changer.” The gospel rendered all people—slave-free, Jew-Gentile, man-woman—as equal before the grace of God. The power of the gospel was destined to undo systemic slavery. For the body of the greatest “slave” to God—Jesus Christ—was crucified on a cross for both earthly masters and slaves alike.

The majority culture today has very few problems with homosexuality. On the other hand, a surface level reading of the Bible reveals homosexuality as sinful (Genesis 19; Leviticus 18:22; 20:13; Mark 10:6-9; Romans 1:25-28; 1 Corinthians 6:9-11; 1 Timothy 1:10). Yet many professing Christians, pastors and scholars make sophisticated arguments that the Bible never condemns monogamous, consensual same-sex relationships. You can hear a helpful response to the most popular arguments here. But is the Bible really anti-gay?

First, rather than say the Bible is anti-gay, it is much more accurate to say it is pro-marriage. Rather than focus on the Bible’s condemnation of same-sex romantic relationships and intercourse, it is much more helpful to understand the Bible’s exaltation of the beauty of marriage and what it portrays. From the beginning, God designed marriage to be a portrait of the life-giving, sacrificial love of Christ for his Bride, the Church (Ephesians 5:22-33). This couldn’t be stated more seriously: all of the Bible’s condemnation of same-sex romance and intercourse is due to the way it distorts God’s original design to display the mystery of Christ and the Church through the permanent union of one man and one woman for life. All same-sex romantic and sexual relations distort the unique God-ordained image portrayed through the complementary union between man and woman: Christ and his Bride.

Second, a major reason today’s culture finds the Bible’s teaching on homosexuality so offensive is because of a psychological invention by Sigmund Freud in the 20th century. Prior to Freud, the concept of sexual-orientation didn’t even exist. Rather, homosexuality was only referred to as a verb, something someone did. But today—because of Freud—we have created a new category of homosexuality as something someone is—a fundamental identity. Now, our most fundamental essence is our sexual desires and fulfillment. The Bible has a very different understanding of human nature: we are all corrupt, even to our deepest desires and wants. Our most fundamental identity is not sexual-orientation, but soul-orientation. This explains why we take it as an affront on our identity when the Bible condemns gay sex and romance. The problem is our sexual longings are not our most fundamental identity. Rather, what our souls worship is who we are to the core, because we are what we worship, not what our bodies want sexually.

The Beauty of a Cross-Bearer

Is there any positive social pressure to beleive the Bible? This depends on whether or not you have encountered the beauty of a "cross-bearer." One of the most enticing things about the gospel is the way it changes people from self-centered comfort-seekers into self-sacfrificing cross-bearers. It is true the church is replete with hypocrites and false-representatives of Jesus Christ. We have much to repent of and ask forgiveness for. On the other hand, few things are as perplexingly beautiful as a transformed sinner. For example, Paul the apostle hated, persecuted, imprisoned, and killed Christians (Galatians 1:13) until he met Christ, the one who bore his sins on the cross (1 Peter 2:24). From that moment on, Paul the apostle embodied the one who carried his sins to death (Colossians 1:24). He poured out his life so that others might encounter the love and joy of Christ (Philippians 1:24-26; Philippians 2:17-18). Other examples include:

A true, authentic Christian is not merely a nice person who does good things. There are plenty of unbelieving people who are nice and do good things. The uniqueness of an authentic Christian is their glad willingness to suffer for the sake of others knowing the love of Jesus Christ. The Bible is full of people like this. So, it is time we return to the days when we gladly suffer reproach and persecution in the act of humbly loving and serving others. Why? Becauase the most beautiful Cross-Bearer (Jesus Christ) left us an example when he carried our sins to death that we might be forgiven and have life eternal with him (1 Peter 2:19-21).

In conclusion, the social pressures to discredit the Bible bark stronger than they bite. Next week we will conclude our series on the personal reasons to believe the Bible. That is, in what way does the Bible engage and persuade our hearts to arrive at strong belief in the Bible?

[1] There is even a new apologetic movement in the black community called, “Urban Apologetics.” It addresses the particular objections which come from black culture.

[2] This is a very brief overview. For a more in depth look at this issue see Doug Becker’s article from Emergence Church here: http://www.emergencenj.org/deeper-study/post/slavery-in-the-bible You can also watch Peter Williams’ lecture here: https://www.youtube.com/watch?v=EUOsBQYuZ9g

[3] Chattel slavery is so named because people are treated as the chattel (personal property) of the owner and are bought and sold as commodities.